Foreign Ministers of Poland and Hungary in China

On 29-31 May, at the invitation of the Chinese side, the Ministers of Foreign Affairs of Poland and Hungary, Zbigniew Rau and Péter Szijjártó, visited Guiyang city in Guizhou province. There they met with Minister Wang Yi, with whom they discussed the matters of current economic and political cooperation, in particular the future of the 17+1 group. The visits coincided with a crisis in relations between China and the EU as well as the imposition of sanctions by each side in connection with the persecution of the Uighur minority in Xinjiang. The meeting was also prompted by the announcement of the Lithuanian Foreign Minister who said that Vilnius would effectively withdraw from the 17+1 format, which is a platform for cooperation between China and Central and Eastern European Countries. 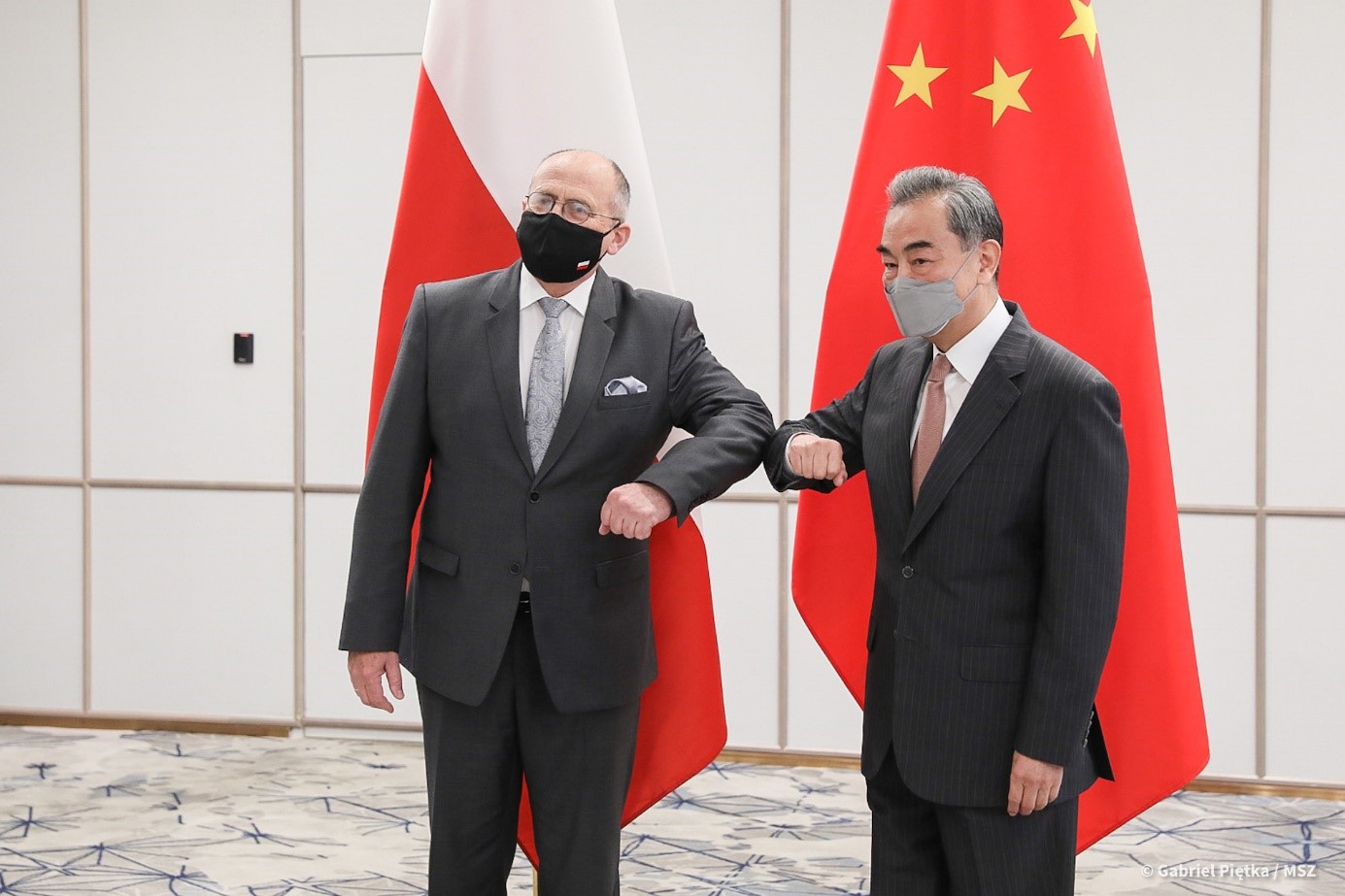 In a joint communiqué following the meetings with representatives of Poland, Hungary, Serbia and Ireland, Minister Wang Yi announced that the sides reached a “broad consensus” on numerous issues. The Chinese side stressed that the visits were symbolic as they were the first direct meetings with Foreign Ministers of EU member states. A hope was expressed that the sides would hold pragmatic and constructive dialogue as well as overcome the barriers that divide them. On March 22, the European Union, the US, Canada and the United Kingdom jointly imposed personal sanctions on four Chinese officials, responsible for repression in the northwestern province of Xinjiang. This was the first such act since the Tiananmen Square massacre in 1989. In retaliation, Beijing has imposed sanctions on the Members of the European Parliament (MEPs), scientists and research centers that criticized the activities of the CCP. The five sanctioned MEPs included: Reinhard Bütikofer, Michael Gahler, Raphaël Glucksmann, Ilhan Kyuchyuk and Miriam Lexmann, known for criticizing Chinese policies. Consequently, on May 20, the European Parliament adopted a resolution to suspend efforts to ratify the Comprehensive Agreement on Investment (CAI) until sanctions on European politicians and institutions are lifted. The talks with Polish and Hungarian Ministers were therefore an attempt to resume dialogue and reduce resistance to ratify the Agreement in the future.

Hungarian Minister of Foreign Affairs and Trade Péter Szijjártó objected to the stigmatization of vaccines, stressing that the pandemic is not a political matter, the virus has no political background and vaccinations should not be considered in terms of ideologies. During the pandemic, Hungary strengthened cooperation with China in the field of health, which included a contract with the Chinese company Sinopharm for the delivery of five million jabs. According to Minister Szijjártó’s declaration in May, Sinopharm fulfilled contract obligations on time and the Ministry of National Defense of the PRC sent additional 200,000 doses along with the last of 15 shipments. According to the Hungarian side, the vaccines purchased in China have helped to achieve one of the highest vaccination rates in Europe and worldwide. As of June 4, more than nine million doses have been administered in Hungary, making 39% of the population fully vaccinated. During Minister Szijjártó’s visit to Guiyang, the Hungarian government announced a plan to begin production of the COVID-19 vaccine at a factory in Debrecen as part of a €157 million investment. The finalization of the investment would allow for partial independence from external deliveries and domestic production of vaccines. The project would allow for a closer cooperation with China and a technology transfer to the Hungarian pharmaceutical sector. Minister Wang Yi stated that China supports Chinese companies which seek opportunities for vaccine production in Hungary and is ready to promote health cooperation between the two countries also at a higher level.

The willingness to become independent from the vaccines delivered under contracts concluded by the European Commission (EC) could constitute an important element of the campaign for the 2022 parliamentary elections. Relations between Brussels and Budapest have remained strained for years and Viktor Orban’s government has repeatedly accused the EU of being weak in the fight against the pandemic. Own domestic production of vaccines, without the involvement of the EC, could be used to further criticize the EC as well as build a narrative about the effectiveness of the Fidesz government and its multi-vector policy. MTI, a state news agency, reported that Hungary might become self-sufficient in jabs production from the end of 2022. Moreover, on 20 May, the Hungarian government decided not to sign a third contract with BioNTech and Pfizer for the supply of vaccines. It would allow EU countries to purchase 900 million shots of serum adapted to different variants of the virus, with a possibility to buy additional 900 million doses.

The Hungarian minister’s call to de-ideologize the vaccine issue also refers to allegations against Chinese authorities, connected to the so-called vaccine diplomacy. In Western analytical circles and media, it is presented as a tool for building political and economic influence. It is pointed out that Western countries need to offer an adequate alternative to prevent China from strengthening its influence mainly in developing countries. The approval of China’s Sinopharm and Sinovac vaccines by the World Health Organization (WHO) paves the way for their wider distribution under the COVAX mechanism. The words of support of Minister Szijjártó reflect the message promoted internationally by the authorities in Beijing, whose aim is to maintain close cooperation at the highest level. Budapest looks forward to further joint projects, which include the construction of the Fudan University campus in Budapest (€1.5 billion) or the Budapest-Belgrade high-speed railway (€2 billion).

A series of meetings with the Foreign Ministers of Poland, Hungary and Serbia overlapped with the diplomatic crisis in relations of Lithuania and China as well as the declaration of the government in Vilnius to withdraw from the 17+1 bloc. In a message sent to Politico, Lithuanian Minister of Foreign Affairs Gabrielius Landsbergis called on the other members of the initiative to withdraw from the “dividing” bloc and instead cooperate in the “27+1” format, i.e., directly as the European Union. Landsbergis stressed that “the EU is strongest when all 27 member states act together along with EU institutions.” The declaration of Lithuania’s actual (though formally unconfirmed) withdrawal from the “17” caused a risk of a chain reaction that could potentially hit China’s international image and hinder cooperation in the region. The visits of Yang Jiechi in Slovenia and Croatia, followed by Wang Yi’s meetings with the ministers of the three most important 17+1 countries, were partially an attempt to strengthen the group and potentially give it a new impetus. Hungary and Serbia concentrate the most Chinese capital if foreign direct investment (FDI) is also taken into account. Likewise, the governments in Belgrade and Budapest are the most pro-Chinese among European countries. Poland, due to its economic and political potential, is a valuable partner in the region, even taking into account the strongly pro-American stance of the authorities in Warsaw during Donald Trump’s presidency. Its location on the Silk Railroad and investment attractiveness are assets that could lead to an intensified partnership. So far, the 17+1 group has been fairly unanimously assessed as an initiative that has failed to meet the hopes and expectations of the countries in the region. Initially, the West perceived it as a “Trojan horse” at the gates of the European Union, however, there have been no noteworthy political results, apart from Hungary. For instance, with regard to the China-EU CAI, its main advocates included Germany and France, not the members of the “17.” In terms of investment and trade relations, it is the Western European countries that maintain much deeper and potentially riskier contacts.

The meeting with the Ministers of Foreign Affairs of Hungary and Poland should be regarded as a diplomatic success for Beijing because it partially managed to limit the damage caused by the declaration of Lithuanian Foreign Minister. A brief communiqué of the Polish side concerning the meeting stated that: “Minister Rau shared the Polish assessment of the ‘17+1’ initiative. The ministers agreed that this format, after necessary adjustments, should be an important pillar of cooperation between Europe and China.” Thus, Polish authorities signaled that they do not intend to leave the group, although the passage about the need for “adjustments” may indicate a certain degree of disappointment with the format and expectations of greater involvement of Beijing. Emphasizing the importance of cooperation with Europe may also provide a counternarrative to criticism of the “dividing” nature of the 17+1 initiative. The Chinese statement is much longer and in the media the meeting was assessed as a possible sign of rapprochement between Beijing and Warsaw amid the deterioration of Polish-American relations during Joe Biden’s presidency. The central position of the US in the European security architecture and the pro-Russian attitude of the Chinese government mean that the rapprochement, if it does occur, would be primarily economic.

Other potential motivations behind the invitation of the Polish Minister to visit Beijing include consultations on 5G technology legislation and the trial of Huawei’s former sales director, accused of spying for China. The following passage from the Chinese communiqué may indicate that this topic was raised: “[the People’s Republic of China] hopes that Poland can offer a fair, open and non-discriminatory business environment for Chinese enterprises investing and operating in Poland.” The draft law on the National Cybersecurity System, outlined by the Ministry of Digitalization in September 2020, provided, among others, for the possibility of excluding a supplier of equipment and technology on the grounds of threats to alliance commitments, the relationship between the company and the state, or the respect for human rights. This way of formulating the law was perceived by the experts as a tool to exclude Huawei from building new infrastructure.

Additionally, Poland hopes for an increase in exports to China and a greater influx of capital in the form of direct investments. The Chinese statement emphasized that Minister Rau stated that “Poland hopes to expand the export of agricultural products to China and deepen cooperation in areas such as economy and trade, investment, logistics, and education.” To date, China’s share in FDI flows to Poland has been marginal, lower than, for example, investments from South Korea or Japan. Since the initiation of the 17+1 format, cooperation between the two countries has been growing rapidly, mainly due to the increase in Chinese imports. Poland’s low exports are partially caused by the strong integration of Polish industry and Germany, where large quantities of semi-finished products are sent and, after being transformed into final products, go directly to China and are included in the export statistics of Germany, not Poland.

The future of the 17+1 format would largely depend on the willingness of the Chinese side to increase its economic engagement in the countries of the “17.” So far, the format has been a façade and has not led to sustainable political and economic results. Increased investment, particularly in greenfield investments, and further opening up of markets to imports from Central and Eastern Europe, are prerequisites for improving the perception of the 17+1 initiative.