The event “The European Union in the New Times. What Will Change After the Last Elections” was part of the new project “Meetings with Geopolitics”. The subject of the debate was the analysis of the EU’s condition after the last European Parliament elections. The analytical discussion was attended by four authors of The Warsaw Institute Review and experts of the Warsaw Institute think tank – prof. Tomasz Grzegorz Grosse, dr Rafał Zgorzelski, dr hab. Piotr Bajda and Grzegorz Kuczyński. The meeting was moderated by the editor-in-chief of the magazine and Vice President of the Warsaw Institute think tank Izabela Wojtyczka. 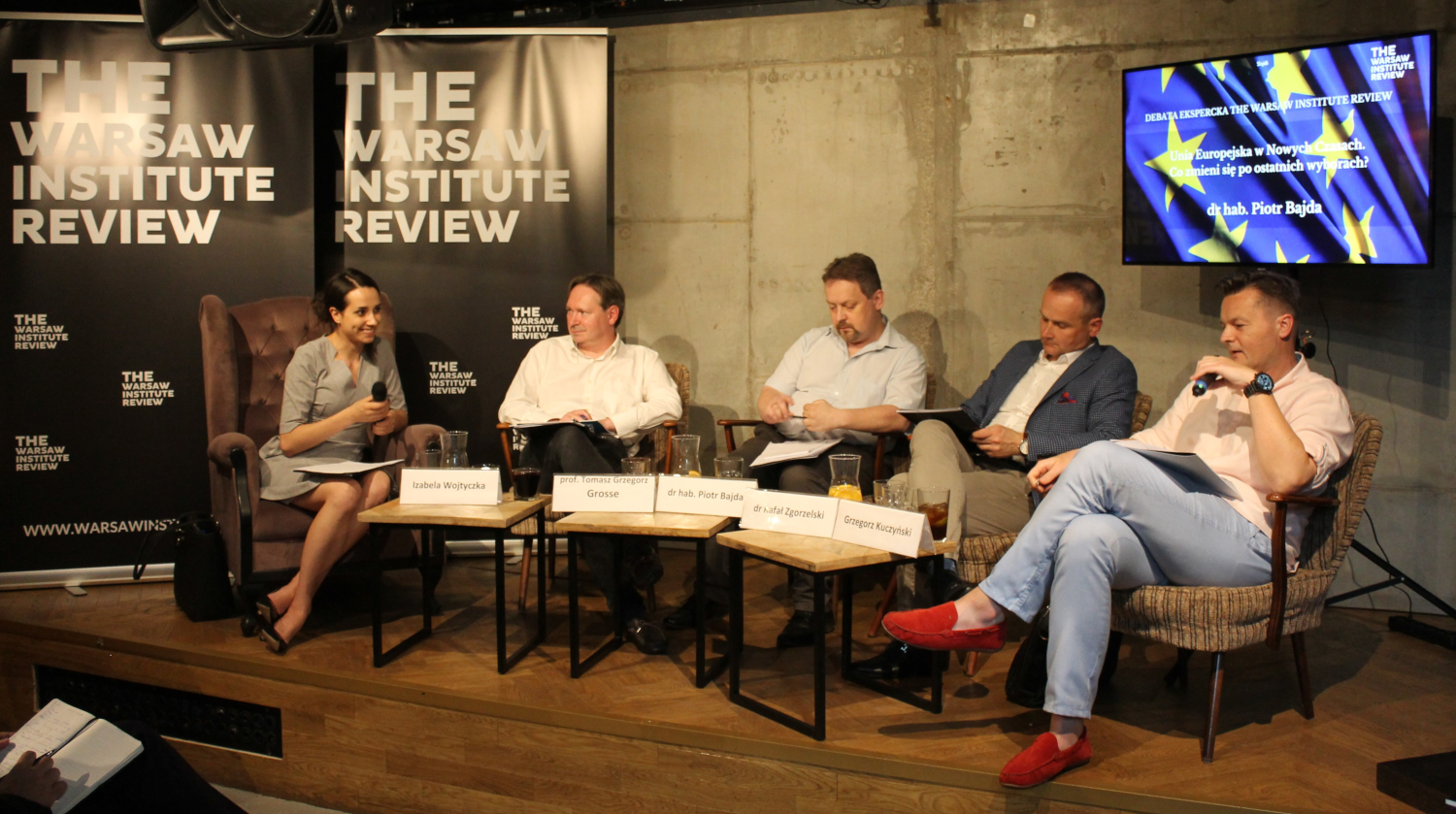 The European Union – a party and ideological perspective

Professor Tomasz Grzegorz Grosse – sociologist, political scientist, historian, professor at the University of Warsaw and head of the European Union Politics Department at the Institute of European Studies, Faculty of Political Sciences and International Relations at the University of Warsaw and an expert at the Warsaw Institute Foundation – was the first to take the floor.

During his speech, Prof. Grosse presented the situation in the European Union after the last elections and the political transformation that will take place in its structures. One of the most significant changes mentioned was the new balance of power between France and Germany, which determines a new vision and strategy for all EU member states. – President Macron’s party, which has joined the former liberal party together with its MPs will not only form a broader coalition but also has ambitions to set the tone for this policy in the European Union – Professor Grosse said. – The Macron party and its views are supposed to be a political opponent to the European People’s Party – a very efficient mechanism of German policy in the West. While the European People’s Party is weakened, Macron wants to end its monopoly in the EU and create a new faction under the leadership of Paris and with ambitions to influence other European institutions.

Professor Grosse’s lecture ended with a summary of the consequences of the latest changes in EU structures. The first result of the changes will be a realistic and confident Brexit carried out without any international agreement, the cause of which is that Britain will leave the European Union in disagreement. This will result in many economic consequences and political tensions between the United Kingdom – supported by the USA – and the European Union. Another consequence of the recent changes is the deepening and opening of another field of dispute between France and Germany – conflicts over positions, over the future of the Eurozone and the strategy for action. The last of the post-election consequences mentioned was the analysis of the composition of the new European Parliament, which will become more anti-American than it has been to date. – If, after the elections, Parliament is skeptical of America, it must naturally seek to establish strategic relations with Russia. This means that we should expect initiatives that will end the conflict with Russia – concluded Prof. Grosse.

Dr. Rafał Zgorzelski, an expert on modern political thought, modern geopolitical systems, a commentator on economic patriotism, international relations, and an expert of the Warsaw Institute Foundation for many years, was the second speaker.

Dr. Zgorzelski emphasized that geopolitics should be understood as a rivalry between different interests in national politics. He divided the European Union into countries with an integration approach – renouncing the attributes of state power in favor of the EU, and countries with a sovereign approach – treating the EU as a field for economic cooperation. – When looking at geopolitics, the role of the superpowers cannot be ignored. I am concerned about the Chinese risk and the Russian-Chinese rapprochement expressed in the form of another agreement. This does not inspire much optimism, as anti-American tendencies are increasing in Europe. I am very concerned about this,” said the magazine’s analyst. According to Dr. Zgorzelski, the presence of Americans in Poland is essential to ensure protection against China and Russia. Moreover, the expert referred to the lecture of his predecessor, Professor Grosse, pointing out that the Franco-German dispute is of little importance for Poland, which should pursue its interests, support the transatlantic option and Taiwan. 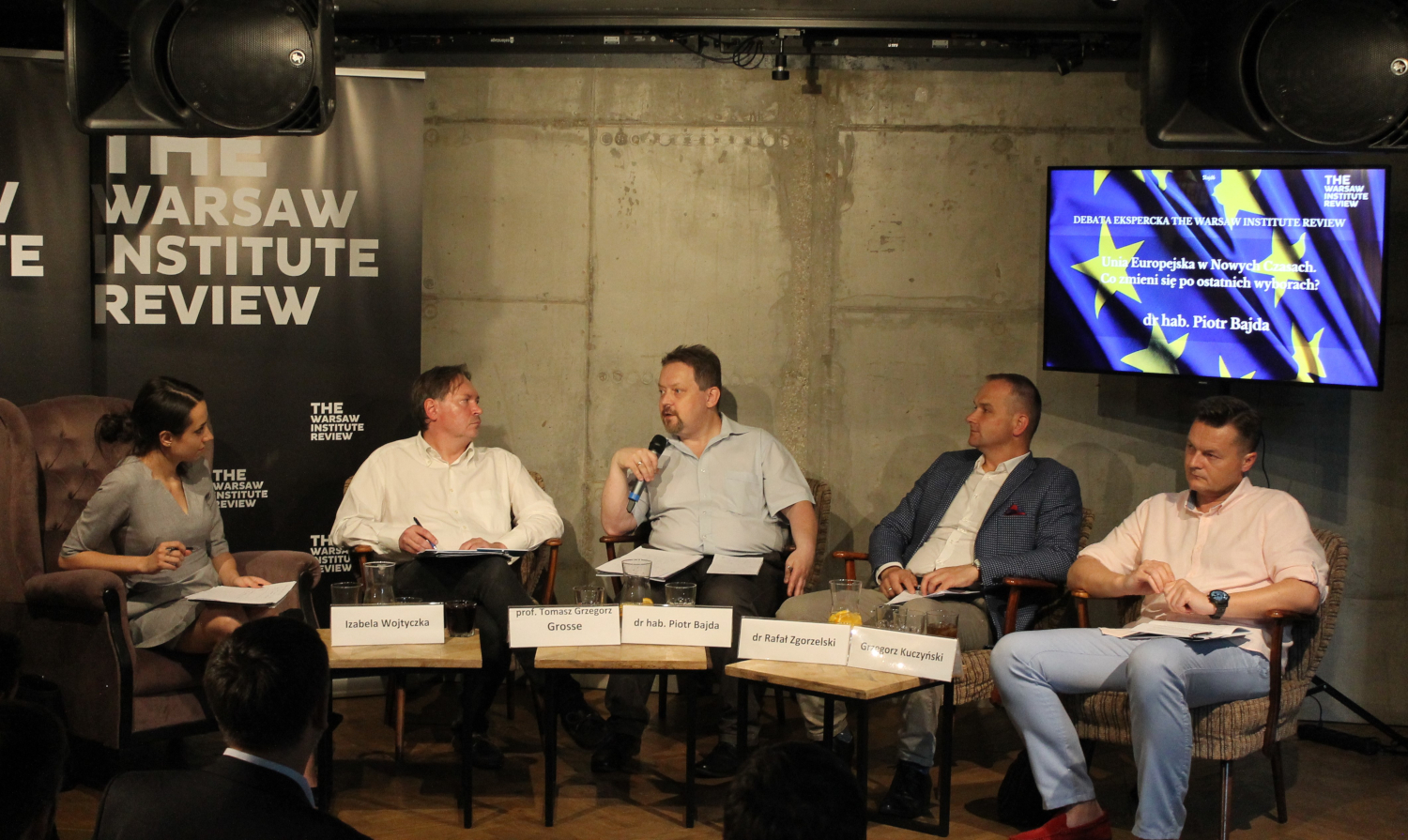 The third lecture was given by Dr. Piotr Bajda, professor of political science at the Cardinal Wyszyński University in Warsaw, an expert in political sciences, and analyst of Central and Eastern Europe.

The professor started his lecture by pointing out that the last elections to the European Parliament and the current situation in the EU structures are an excellent opportunity for the Central European countries to gain independence. Otherwise, if the region does not take advantage of the current opportunity, its status will move towards greater peripheralization. According to Prof. Bajda, the problem of Central Europe is the lack of definition of one’s status and lack of subjectivity – We have a clear definition of what Western Europe is, but we do not say what Central Europe is. It is difficult to talk about oneself when we do not even know what we are called. We need to define Central Europe – Bajda said. The expert pointed out that in the global discourse, Poland cannot be “the area to the East of Berlin,” but it must build its own term. The second challenge for Poland is the Three Seas Initiative – an opportunity to present Poland as a country excelling in its foreign policy and as a partner of the United States, which is increasingly willing to support the development of the countries of Central and Eastern Europe. Poland must take advantage of the opportunity to introduce the Central European doctrine; otherwise, we will lose it for many years to come – stressed the analyst. According to Prof. Bajda, Poland should treat partners in the South much more seriously and develop a network of numerous contacts with expert circles, think-tanks, and universities.

The last expert to take the floor was Grzegorz Kuczyński – a graduate of the specialist Eastern Studies at the University of Warsaw, journalist, expert on the Eastern policy, author of numerous books and publications about the backstage of Russian politics and Director of Eurasia Program in the Warsaw Institute think tank.

The expert stressed that Russia is not putting a stop to its aggressive steps in Europe, but ignores them, having an alibi in the form of received sanctions, which are currently rather ritualistic. The expert pointed out that the last situation when the European Union opposed Russia as a single, united partner took place 12 years ago, after the EU summit in 2017. Twelve years later, pro-Putin and pro-Russian parties from different parts of the European Union are gaining strength in Europe. – The importance of parties with sentiment towards Russia will be much higher – said The Warsaw Institute Review expert – Western Europe will increase its support for Russia. In my opinion, the next few years will see the EU Member States continue to draw closer to Russia. As a result, Russia is once again receiving a signal that it can start to behave aggressively in Europe. The West did not draw any conclusions from the aggression against Georgia – he added. According to Kremlin policy analysts, the political situation in the EU may be the beginning of a “reset” of relations between the West and Russia and the beginning of a greater division in the EU. The ideal scenario is a strong Europe with clear Euro-Atlantic support.

The four lectures were followed by a Q&A session between the participants of the event and the panelists moderated by the Editor-in-Chief, Izabela Wojtyczka. Dr. Zgorzelski expressed his concern about relations between China and Russia, pointing out that Europe needs help and cooperation with the United States. Prof. Bajda called for the initiation of the Polish doctrine of policy towards the Central European States; while Grzegorz Kuczyński pointed out that Europe should take a pro-Atlantic approach instead of giving Russia a clean slate in new relations. We invite you to take part in the next initiatives of The Warsaw Institute Review quarterly, listen to the podcast, and see the photos from the debate.