The Most Expensive Bridge in Romanian History

The bridge will enable travelling from Brăila to the other side of the Danube. Currently, only a ferry sails on this route which is inconvenient not only for dwellers, but also for transport. The bridge has been planned for years but the investment has been postponed due to huge costs. Now, there is a chance for its construction. First preparatory works have already started. The investment worth 433 million euro is to be ready in four years. 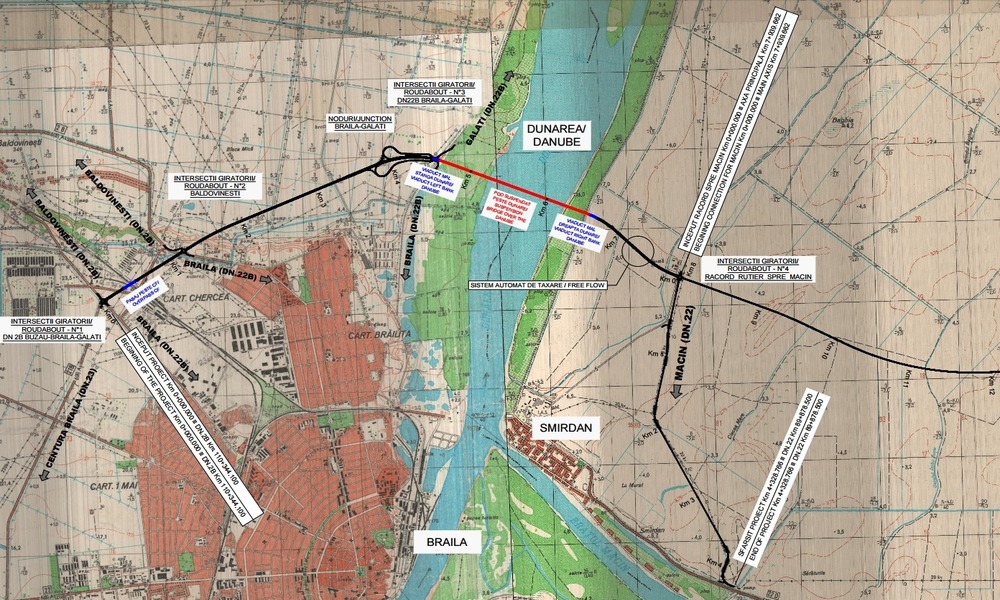 For now, first preparatory works have started. They mainly entail cutting down trees, preparation of the terrain and access roads. But the worst is yet to come for the contractor. The media report that the bridge “is the most complicated construction after the outbreak of the revolution” (which is after 1989 – editorial note).

An Italian-Japan consortium Astaldi-IHI has already won a tender last year. Since then, the construction and erection of the bridge were estimated at four years (the deadline is set in 2022). A total amount of costs should amount to as many as 433 million euro which means that the entire investment exceeds two billion lei. The bridge itself is to be two kilometres long. This will the one of the biggest crossing in Europe whose construction will be based on two pylons. In both directions, two roadways and two emergency lanes as well as access ways for pedestrians and bikers are planned. Additionally, the contractor will have to build over 20 kilometres of access roads of the same standard.

Currently, to get to the other side of the Danube one has to use the ferry which sails between Brăila and Smârdan. Another bridge is located a hundred kilometres south. It is not surprising that the crossing is so long-awaited. First arrangements have been made at the beginning of ‘90s. However, money has always been an obstacle. When the mentioned consortium won the tender in the middle of the previous year, a hope flared up.

The bridge will be the third crossing over the Danube in this country and its construction should be an impulse to start the development of the entire region. Not only Brăila and nearby Galați, but also Tulcea which lies in the delta of the Danube will benefit from the crossing. It is already an important industrial centre and a port city. There, just as in Brăila, shipyards capable of producing vessels for the Romanian navy are located. Construction of this crossing means that the access to Tulcea, especially to its north-eastern parts, will be easier. What is more, it will also open a new passage between the Romanian coast and Moldova and Ukraine.

For the Romanian government, the realisation of this investment is also a sign of prestige. The media report subsequent records. It will be the fifth bridge in Europe when it comes to the length of the span (1120 metres). In the history of Romania – it will be for sure the most expensive bridge. The time of construction is also worth mentioning as now it is 27 years since the formation of the idea.