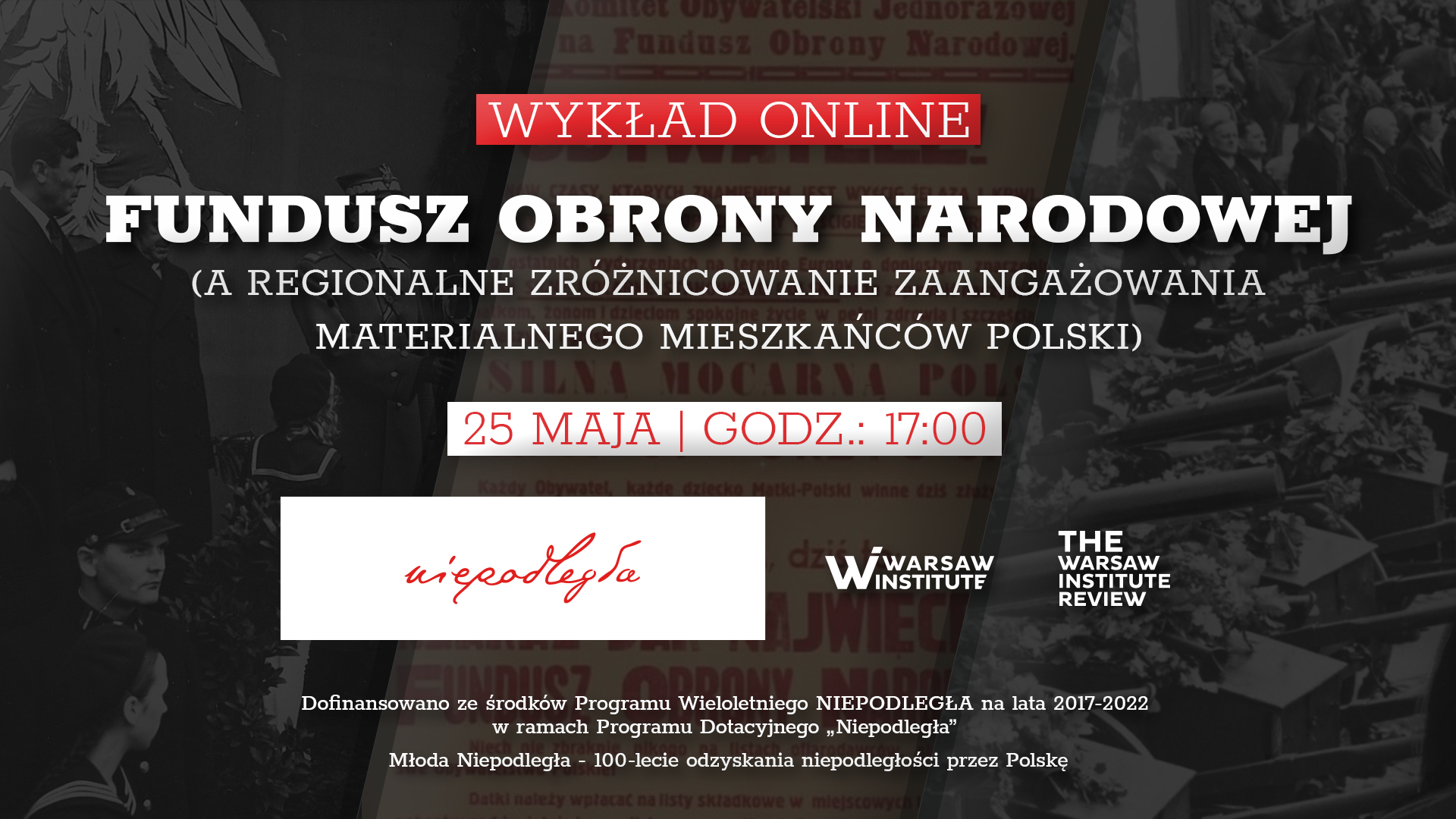 The event was held as part of the program Young Independent – The Centenary of Poland Regaining Independence, financed under the NIEPODLEGŁA Multiannual Program for 2017-2022.

Dr. Jan Wiśniewski is the Coordinator of the Regional Center for International Debate in Toruń, Poland. He also works as a lecturer at the College of Social and Media Culture in Toruń, Poland. He is also a research worker at the Nicolaus Copernicus University in Toruń. His field of expertise is the history of World War I, the Russian civil war, and contemporary armed conflicts in the post-Soviet region. He was a scholarship holder of, among others, the Lanckoroński Foundation, Poland’s National Center for Research and Development, and the Ministry of Education and Science. He authored three monographs and over sixty research articles in domestic and foreign journals.

The lecture consisted of three parts. The first embraced the origin of the National Defense Fund (Fundusz Obrony Narodowej, FON) in the pre-war period. In the second part, the speaker portrayed the Fund during World War II. In the last chapter, the lecturer outlined the post-war reality and how the Fund was appropriated by the Communist regime in Poland. At the lecture, the speaker insisted that a large group of Poles got involved in backing the Fund before the war, a move that stemmed from their fear of an imminent threat from emerging Nazi Germany and the Soviet Union. At the same time, Dr. Wiśniewski noted that the budget of the Military Affairs Ministry, or the pre-war equivalent of Poland’s Ministry of National Defense, could not fully satisfy the needs of the Polish army. Although Poland had one of Europe’s most numerous armies of over 1,000,000 soldiers, it saw a severe shortage of weapons. The speaker also added that with money collected in the Fund it was possible to complete some vital military projects in pre-war Poland, one example being the construction of ORP Orzeł (Eagle), the lead ship of her class of submarines serving in the Polish Navy during World War II. The lecturer added that people from different backgrounds donated to the Fund, with many from Poland-based minorities, mainly Belarusians and Ukrainians. The Fund also saw help from the Polish diaspora, notably in Romania and the United States.

In 1939, FON sources were shipped to France via Romania; before they had been divided into gold and silver. Silver traveled from Romania to France through the seaport of Marseille where it remained till the end of the war. Gold was transported to London. Some 210 kilograms of gold was shipped to Sudan where it remained until 1944 before being sent to the Rubens Hotel in London that back was home to the headquarters of the Polish Armed Forces. 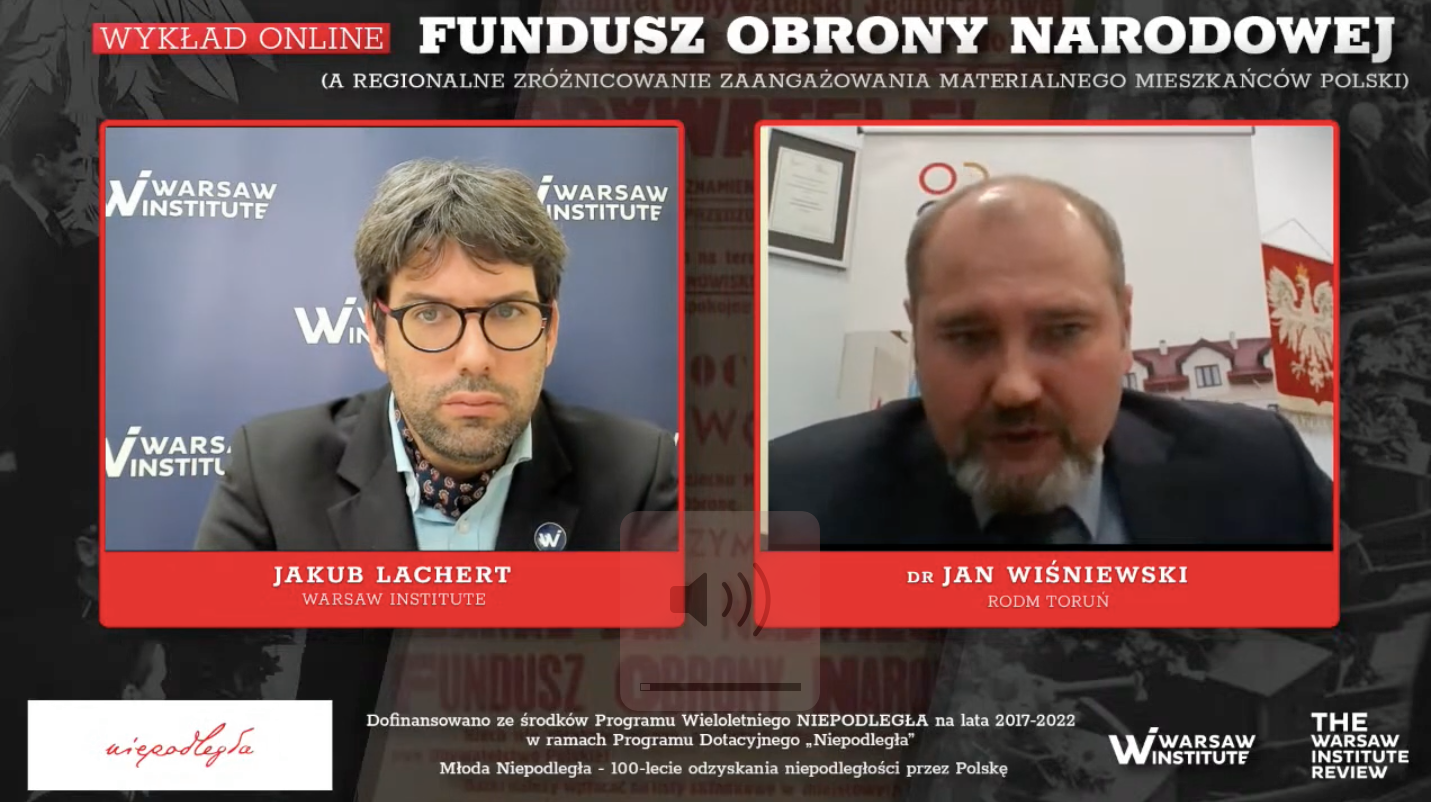 In the third part, Dr. Wiśniewski described the fate of the Fund after the war, adding it was challenging to give a clear estimate of how much of it was grabbed by the Communist regime in Poland. General Stanisław Tatar then decided to send the gold back to Communist-controlled Poland. According to the speaker, the purpose was to win the favor of new state authorities. Yet after General Stanisław Tatar was given the Knight’s Cross of the Order of Polonia Restituta, he was detained for spying charges and sentenced to life imprisonment. The lecturer also mentioned the fate of silver fits that traveled from France to Poland under a deal signed by Edward Gierek, First Secretary of the ruling Polish United Workers’ Party, and Valéry Giscard d’Estaing, President of France.

To conclude, the speaker said that the Fund, aimed at collecting funds through long-year donations from the Polish nation, fell victim to Communist politicians.

The event “The History of the Church in Ćwiklice” was held as part of the program Young Independent – The Centenary of Poland Regaining Independence. Financed under the NIEPODLEGŁA Multiannual Program for 2017-2022.