The Chinese march towards the ocean fleet

At the turn of 2019 and 2020, People’s Liberation Army (PLA) put into service the first built domestically aircraft carrier “Shandong” (山东舰, type 002) and the second biggest in the world guided missile destroyer “Nanchang” (南昌 type 055). These events constitute subsequent elements of the modernisation process aiming to establish the world-class ocean navy fleet until 2049 capable of power projection in the Indo-Pacific region. 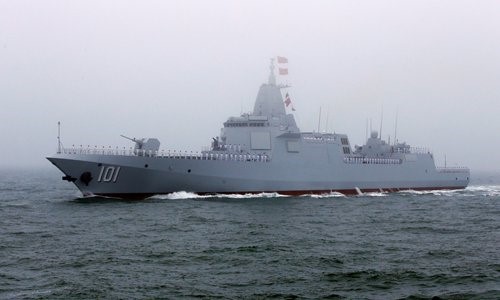 Achievement of this goal will lead to a severe reconfiguration of the military power balance in the region and will undermine the supremacy of the US Navy which has lasted since the end of WWII. The scale of the progress is depicted by the fact that between 2015 and 2017 the tonnage of launched units of PLA was almost twice as big as the tonnage of the US Navy and Chinese shipyards started mass production of modern 055 and 052D units.

Ambitious and comprehensive modernising programmes are supposed to lead to the enhancement of the Anti-Access/Area-Denial (A2/AD) capabilities of PLA in the first place and the elimination of the possible American intervention in the local conflict. In the long run, the increase in offensive capabilities is aimed at combating unfavourable geographical conditions and expanding control over the “first island chain” (yidaolian yinei 一岛链以内).

China remains dependent on the transport of energy sources and goods by sea, mainly through the Indian Ocean. However, in contrast to the USA, they cannot control main sea routes on their own (Sea Lines of Communication –SLOC), which exposes them to a blockade in case of conflict. The former President of China Hu Jintao called the situation the “Malacca Dilemma”, referring to the strait between Malaysia and Indonesia which is the main route of transport of hydrocarbons from the Middle East to Asia.

Chinese ambitions of the naval expansion are restricted by the American unsinkable aircraft carrier, meaning Taiwan, islands of Japan and the presence of the United States Seventh Fleet in the region. The US bases located not only in Japan but also in South Korea and in “the second island chain” (Guam, the Marianas) deprive China of the strategic depth. East coast focusing main economic and political centres (Shanghai, Shenzhen, Beijing, Tianjin) is exposed to a potential attack. This is the reason why the spiritual father of the Chinese fleet Admiral Liu Huaqing said that it was necessary to gain control over the South China Sea and Taiwan and to operate firstly within “the first island chain” and until 2050 within “the second island chain”, near the Marianas and Guam, as well.

The service of the aircraft carrier “Shandong” does not change the balance of power in the region as it is limited by the deficiency of its Soviet prototype – “Liaoning” (type 001). Limited capacity, lack of regular aircraft adapted to operate over the sea, outdated launching technology and conventional drive make the machine much worse than the American aircraft carriers “Nimitz”, not mentioning Gerald Ford-class units. However, the construction of the aircraft carrier from scratch in the Chinese shipyard provided necessary experience which will be used during the construction works over more advanced types 003 and 004.

The first unit of 055 type, introduced in January 2020, is described as a new generation multi-task guided-missile destroyer equipped with advanced stealth systems and wide range of armament destroying air and submarine units. Thanks to advanced radar systems and EWS (electronic warfare systems), 055 is supposed to be the core of the future escort of aircraft carriers and one of the main threats to the air and submarine units of the potential opponent. American and Chinese sources agree that 055 destroyers pose a threat to all vessels in service. The introduction of missile destroyers into common use will lead to significant enhancement of the People’s Liberation Army and the acceleration of the diminishing process of the USA’s military advantage.