The ongoing coronavirus pandemic has placed French-Russian rapprochement in limbo for roughly six months following its official kickoff in August 2019 during a meeting at the Fort de Bregancon, a summer residence of the president of France. But now the whole process is gaining momentum. There is yet one more topic that could push France closer toward Russia, with the Libya civil war, where both have similar goals. 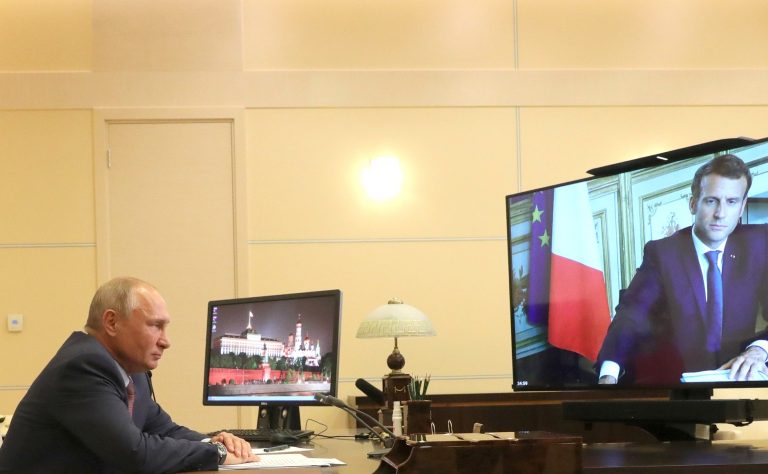 French President Emmanuel Macron on June 27 said he would soon travel to Russia for more talks with his counterpart Vladimir Putin. “The trust-building dialogue initiated with President Putin at Fort Bregancon continues,” Macron tweeted, adding, “we are moving forward and I will soon travel to Russia.” He specifically identified “security in Europe, regional conflicts, and climate, including the melting of permafrost in the Arctic” as topics for discussion. A day earlier Putin had renewed his invitation. Macron’s announcement that he would meet with Putin “at the end of summer” came one day after the two leaders held a video call, Kremlin press service informed. Macron was due to attend the parade on May 9 in Moscow before it was postponed amid the pandemic. Speaking at a video call on June 26, both leaders agreed to talk about Libya where neither Paris nor Moscow could be happy about how the events unfold amidst Turkey’s military involvement. Russian contractors have backed Libyan strongman Khalifa Haftar in his war against forces backing the UN-recognized Government of National Accord (GNA), which is mainly backed by Turkey. Tensions in Libya rose high after an incident, in which both French and Turkish vessels were involved. A French presidential official said both leaders seem to agree on that stance as “France and Russia share a common interest in the stabilization of Libya and the reunification of its institutions.” High on the meeting agenda was the war in eastern Ukraine. Macron reportedly stressed it was crucial to quickly relaunch a road map aimed at ending the conflict as agreed at the Normandy Four summit in Paris back in December 2019. Both leaders said they hope to see another summit on the Donbas. Also, Macron and Putin promised to cooperate more closely to resolve global crises such as those in Syria and the Balkans, with the latter being particularly intriguing. Just to mention that the French leader vetoed the opening of accession negotiations with North Macedonia and Albania in a move that satisfied Moscow that is fighting to expand its sphere of influence in the Balkans.

In the two-hour talk, the two presidents were keen to extend what is known as the French-Russian Bregancon program, named after a summer retreat of the French president where Macron had welcomed Putin back in August 2019. Macron is “confident of progress in key areas with Russia,” his office said. France stands for the development of European cooperation from Lisbon to Vladivostok, Emmanuel Macron reiterated while in talks with Vladimir Putin. Macron is setting eyes on replacing NATO forces with EU-backed defense units and making a deal with Moscow on how to divide out its zones of influence. The first step would be to end the Russian-Ukrainian war yet on the Kremlin’s terms. Emmanuel Macron is the first Western leader looking to bury the West’s post-Crimean policy toward Russia past 2014 –– joint and somewhat agreeing in viewpoints. The French president aspires to “build a new architecture of trust and security in Europe,” one that includes Moscow. Likewise, he seeks to impose his reset policy on the whole European Union. Ideally, he looks to fracture the Euro-Atlantic alliance in a bid to forge new security architecture in Europe.