Interview with the Ambassador of the Republic of Poland in Berlin – Prof. Andrzej Przyłębski 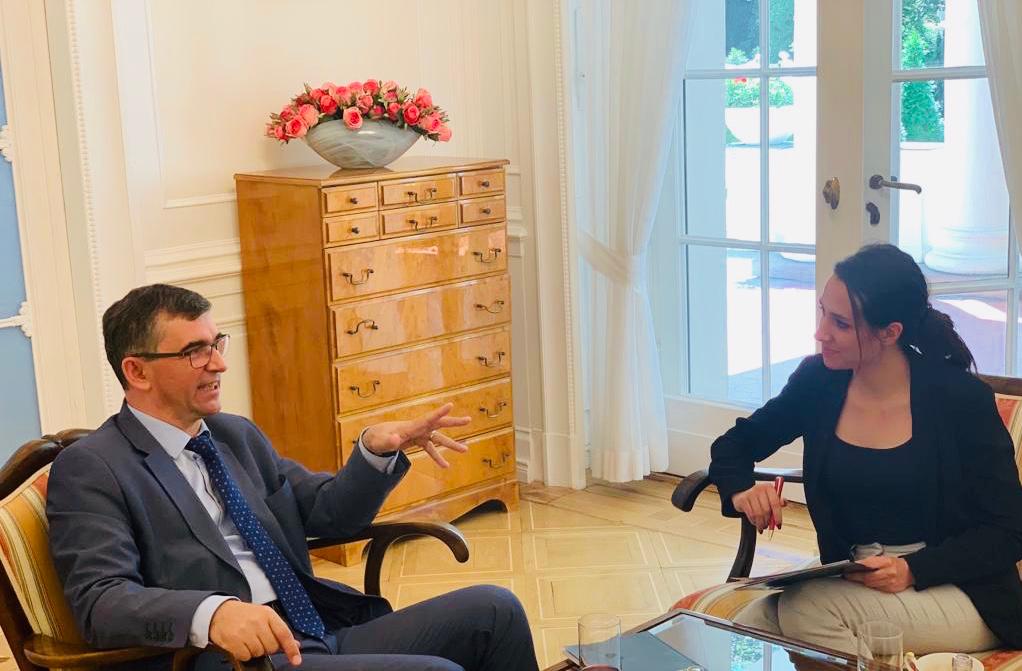 Izabela Wojtyczka:
The brutal German invasion of Poland on September 1, 1939, started World War II. Is there an awareness in German society regarding what had happened 80 years ago on the territories of Poland?

Awareness regarding World War II is minor in today’s German society. I have to say that it is now either absent or distorted. A question arises in my mind of whether or not this is a meticulously planned operation with a deliberate intention to distort history.

I am referring to, first and foremost, the altered discourse of the truth. The media, the Internet, and public discourse are using the wrong type of language – the basis of which are lies. An example of this problem is saying, for instance, “Polish death camps” or “Polish concentration camps” instead of “German extermination camps” and “German concentration camps”. The mistake here rests in the fact that the events were occurring on Poland’s territory – although absolutely entirely upon the German initiative. What is more, Poles were the victims of these events, and Germans the executioners. The narrative of lies mentioned before is becoming embedded in the minds of society; of young people.

Nevertheless, I am confident that this distortion is not a coincidence. It is the result of a deliberate policy, and the first element of acceptance of this distortion is silence – a passive acceptance. A similar strategy can be noticed in the artificially coined word “Nazi” used instead of “German.” In public discourse, the word “Nazi” has become conventional when referring to people who murdered during the occupation. Today the word “Nazi” is not directly associated with the word “German”. This is a meticulous linguistic recreation, which, in consequence, distorts the truth.

Similar examples can be found in books on the history of diplomacy. German diplomacy has attempted to influence, among other things, the structure of the Holocaust Museum in Washington. The aim of this was to prevent the history of World War II from dominating the image of Germany in the minds of its recipients – the Americans. In practice, it translated into the work of officials, diplomats, and politicians who sought to soften the narrative about World War II in the US. Onto all this, they added the story of the most recent history of democratic Germany. The main element of improving Germany’s image were the subjects referring to the economy, tourism, and culture. All this was done to mask the truth of the tragic history of atrocious and cruel times of war – in which it was the Germans who were torturers and perpetrators.

What strategy should Poland implement towards this?

Of course, Poland should raise the issue of the awareness of the responsibility for losses incurred in World War II. First and foremost, we must build a conscious policy of history. We should also be discussing the events that were happening in Poland in 1939 and after. Our fundamental advantage over the Germans is based on the fact that it is us – the Poles, who stick to the truth. We are not afraid of disclosing the entirety of the historical truth. For that reason, we must effectively build a foreign policy of history – saying that on Polish territories, people were murdered, including special targeting of the intellectual elite, building death camps, destroying cities and monuments. What should also be done is presenting authentic witnesses of those times, searching for studies on how Jews were betrayed and murdered, how many Poles were killed, in what conditions they were dying, and what losses Poland had suffered. In addition, it is necessary to talk about German extermination camps and explain how these cruel times really looked like.

An upsetting observation can be made here that there are several versions of history of World War II. However, it was on Polish soil that people were murdered and that the national wealth was plundered on a massive scale. What tangible steps can be taken to construct a narrative true of those times?

Firstly, we have at our disposal the diplomatic machine – consulates and embassies. Although to effectively bring back the truth, we need to use other channels. We should also take care of the image of our country today. Regrettably, the current negative attitude towards Poland in Germany is being built by foreign correspondents in Poland, for example, German correspondents in Warsaw. We must try to build a positive image of Poland, although it is difficult considering that for over twenty years German correspondents have been destroying these relations.

Aversion to Poles is being fostered in German society. There are claims that democracy and the rule of law are being violated in Poland and that people are being beaten on the streets. To a large extent this is the “contribution” of the German media, which is imposing this image on the minds of everyday citizens. This is where it all begins. Personally, I try to fight against false narratives by supporting more authentic and objective media, which describe real events without falsifying reality. Of course, these are niche publishers, but these are steps to start with. This is a task for several decades.

At present-day, Nazi movements have been strongly revived in Germany. How is the German government reacting to this?

In my opinion, such fascist movements are present in German society because they have a sense of pride and superiority. Historically, this is due to their desire to rule over their neighbors, and, perhaps at times, the whole world. It should be emphasized that when problems arise in society or politics, such movements tend to regain traction. When everything goes well, people associated with these environments do not elicit such attention. A good example is the refugee crisis. When one hundred thousand economic refugees from the Middle East and North Africa region appeared in Germany and began to change the lifestyle and everyday life of Germans, the discussion had started about the threats and the change of everyday life; about the fact that citizens are unable to function normally, for instance, German citizens being afraid to leave home after 8 pm because they feel threatened by people representing different cultures, other habits – people who suddenly started to interfere with their lives.

In this case, pressure should be put on the government to stop these immigrants and solve problems, and in this, namely, to competently distinguish economic immigrants from real refugees. Solutions should be found to predominantly protect the well-being of citizens. Instead, militias are being organized in today’s Germany to try to deal with migrants on their own. Their homes are set on fire; people are under attack. Grassroots movements are revived because the central government does not regulate these problems. It should be firmly stated here that this is largely  due to Chancellor Angela Merkel’s policy. This cannot be concealed, and even the Germans themselves are no longer hiding it. 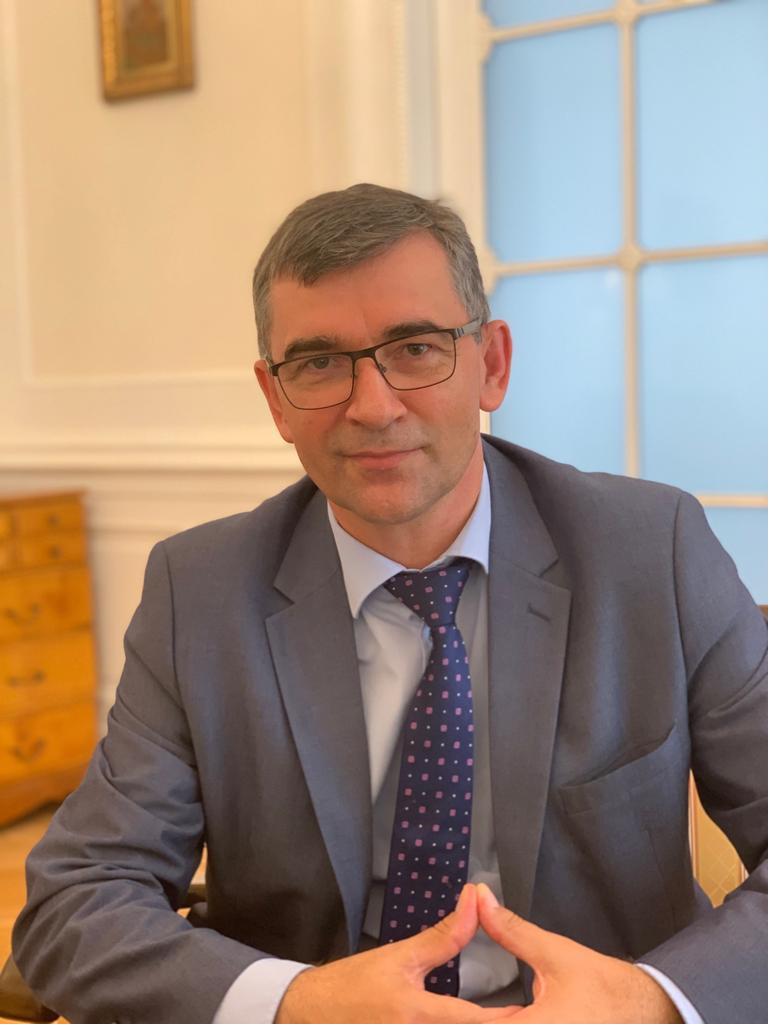 In 2004, all political parties in the Sejm of the Republic of Poland unanimously adopted a resolution on Poland’s rights to German war reparations and on unlawful claims against Poland and Polish citizens raised in Germany. How do Germans perceive the topic of war reparations today?

War reparations are one of the major problems affecting Polish-German relations. It is a topic that always provokes nerves in mutual contacts. Of course, there are two possible forms of reparations: reparations of the state to the other country and reparations for individuals – citizens. Former President of the Republic of Poland, the late Professor Lech Kaczyński mainly fought for the latter form, that is, for the reparation of the property that was plundered from Polish and Jewish citizens in Poland. These are items and belongings forcibly seized by the Germans, such as pianos and paintings, and so on. There is even a historian who once wrote that every German family had plunders from the fact that their soldier fought in the east, because from the missions, he would bring for everyone stolen items from Poland.

It should be said that the idea of reparations is a kind of a Pandora’s box – the Germans “protect” this topic and warn not to talk about it – not to open it, but at the same time they keep a kind approach towards Poles as not to expose themselves to possible accusations of indifference in this matter. Currently, there is little awareness in German society of what happened during World War II, which is why people do not understand these claims. In the political environment there is a great fear of even raising the topic. They warn against it, they suggest moving away from these issues in order not to provoke emotions again. Therefore, it should be clearly stated that there is no understanding of war claims between Poland and Germany. However, I can see that the gradual mentioning of the subject of reparations, steadily raising this topic in closed meetings, does give results – something develops gradually, and a space for conversation is slowly found.

A group of German activists, headed by architect Florian Mausbach, former Bundestag president Wolfgang Thiers, and historian Dieter Bingen, are seeking political consent to build a monument in Berlin to commemorate the Polish victims of the German occupation. What is your opinion on this subject?

The initiative, from the German side, does merit applause. Such a monument in the center of Berlin would make passers-by aware Poland was so cruelly treated by the Third Reich. Such a symbol belongs to all the victims of this war. We must remember the scale of this tragedy and the fact that it was a six-year occupation which resulted in the murder of the Polish elite. This entailed many other consequences, such as making it a facilitating turning point for communists to gain power. Such a monument would, of course, be symbolic to commemorate all victims of World War II, but also to disseminate knowledge on this subject not only among Germans but also foreign tourists. Berlin is, of course, a city often visited by foreigners.

In Berlin alone, I have heard some negative comments regarding the concept of the monument. I have heard that monuments are no longer built today – today there are other ways of commemorating people and events. However, no one mentions what these ways are. There also has been criticism that there are more victims of World War II in terms of nationality – there are Ukrainians, Belarusians, and Hungarians, so a monument should be made for everyone from Central and Eastern Europe. They did suffer as well, of course, but this is, again, a certain dilution of the historical truth. From my perspective, all of this is unacceptable – we should stand up against such an intentional blurring of reality and historical truth, which I consistently try to do at the Polish Embassy in Berlin, reminding of the real events of World War II.